This document will cover the recommended creation and usage of Security Groups within Campus Active Directory. The creation of distribution groups and mail-enabling distribution or security groups is considered out of scope. Security groups are objects that are used to organize users and other directory objects for the purpose of authorization. Groups allow for easier organization and management of authorized access to resources.

Purpose of this Document:

Campus Active Directory delegated administrators should be able to understand and use these guidelines for group management. Groups should be created and named in such a way that the purpose and scope of each group is easily recognized by other administrators. By using these AD group management rules and guidelines, a department can maintain a strong group management strategy. This will prevent the unnecessary proliferation of security groups, which leads to stale objects as well as authentication issues resulting from token bloat and circular nesting.

While delegated administrators have the ability to create their own security groups through tools provided as part of the AD service, some groups originate from external sources such as Manifest.

In addition, the security groups provisioned through Manifest may also be used to authorize access to services that are not bound to Active Directory (e.g. Shibboleth).

It is recommended that when creating and managing security groups you follow the Role Based Access Control (RBAC) model. The RBAC model lays out a multi-level strategy involving individual users, groups, and resources that lends itself to attestation and self-documentation. The pneumonic AGDLP explains the implementation of RBAC in Active Directory.

The AGDLP strategy is based the idea of using the different group scopes at each level:

For example, to give five users access to a particular printer, you could add all five user accounts, one at a time, to the printer permissions list. Later, if you wanted to give the same five users access to a new printer, you would again have to specify all five accounts in the permissions list for the new printer. Or, you could take advantage of groups with domain local scope.

Use global groups to collect users or computers that are in the same domain and share the same job, organizational role, or function. For example, "Full-time employees," "Managers," "RAS Servers" are all possible global groups. Because group members typically need to access the same resources, make these global groups members of domain local or machine local groups, which, in turn, are listed on the DACL of needed resources.

If you choose to use groups with universal scope in a multi-domain environment, these groups can help you represent and consolidate groups that span domains. For example, you might use universal groups to build groups that perform a common function across an enterprise.

First, the administrator creates a global security group for each role (i.e. Finance, Marketing, and Sales) in either Manifest or Active Directory. The staff’s user objects are then added to the appropriate “role” group.

Then the administrator creates domain local security groups for each level of access to be allowed to each resource (i.e. Shared folder – Full Control, Shared Folder – Read Only, Mailbox – Send-as, etc). These “resource” groups are then given the appropriate permissions to each of the resources. It is important that a detailed description of the resource and level of access being provided to the group.

The “role” groups are then made members of the “resource” groups in order to provide the users access to those resources.

Note:
If a user is currently logged into a host when the group changes are made, the user will have to log out and log back in for the newly granted access to take effect. 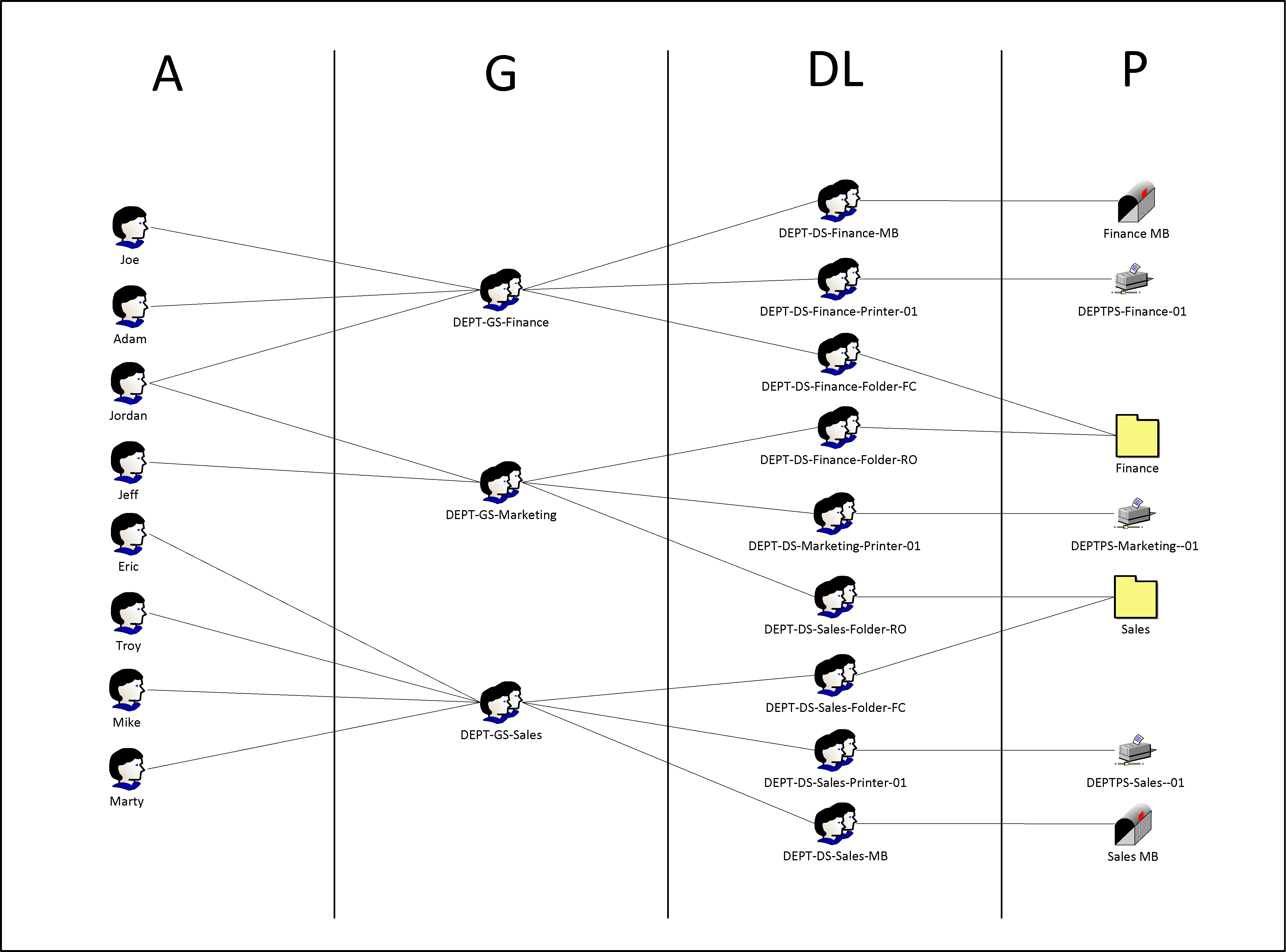